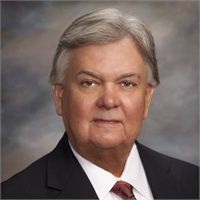 David Allen has been in the financial services industry since 1971. A General Agent of Guardian, David holds the professional designations of Certified Life Underwriter (CLU)® and Chartered Financial Consultant (ChFC)®. He started the Mississippi General Agency, Allen Associates in 1978 which grew into Allen Financial Group. Through the years, David has been at the forefront of the transition into holistic financial planning and bringing people into this honorable career. His agency has been recognized by Guardian and GAMA for many awards. Allen Financial Group joined Ashford Advisors in 2017 in a strategic partnership of Guardian agencies.

He was born in Laurel, MS, where his father, Neville Allen, was a successful P&C Agent and served as the President of the Mississippi Chapter of the Independent Insurance Agents and Brokers of America. The passing of Neville at age 43 had a significant impact on the Allen household. This event led David to the life insurance industry career and sparked his passion for helping others avoid the financial burden his family experienced. David went to Mississippi State University, receiving a degree in Finance and Economics, and was a member of the Pi Kappa Alpha Fraternity, as well as the Air National Guard.

David’s core belief is that people are assets. He believes one of the best things about this industry are the people in it. David has been privileged to be a part of a prestigious Guardian study group that was formed in 1983 with several of Guardian’s most successful General Agents.

David has also been a leader in the industry on a local, state, and national level. Elected by other General Agents to be their representative, he has served on Guardian’s Field Advisory Board. David has been a sponsor of the NAIFA-Mississippi State Convention, Young Advisor Team Events, and NAIFA- Jackson luncheons. He is a Silver Knight level contributor to the Million Dollar Round Table, of which he is a Life Member. At the American College, David is a Golden Key Level contributor as well as Sponsor of the Henry Deppe Endowment Fund. David has also been a Platinum Level Sponsor of the Mississippi Chapter of the Financial Planning Association. At Mississippi State University, he is a Patron of Excellence and a member of the Bulldog Club.

With a passion for adventure, David’s many interests include flying, boating and travel. He earned his private pilot license and flew for many years. His favorite view is the one from the porch at his lake house in McCarley, Mississippi where he likes to spend time with his family, friends, and new grandson, Jeb. David and his wife, Cheryl, married in 1981 and he recruited Cheryl into the business in 1990. They have two lovely daughters – Reverend Courtney Allen, a Senior Pastor at Grace Baptist Church of Richmond, Virginia, and Camille Allen Snyder, a Managing Director at the firm. He and Cheryl are active members of Northminster Baptist Church, where he is a Deacon and a past Chairman of the Board.