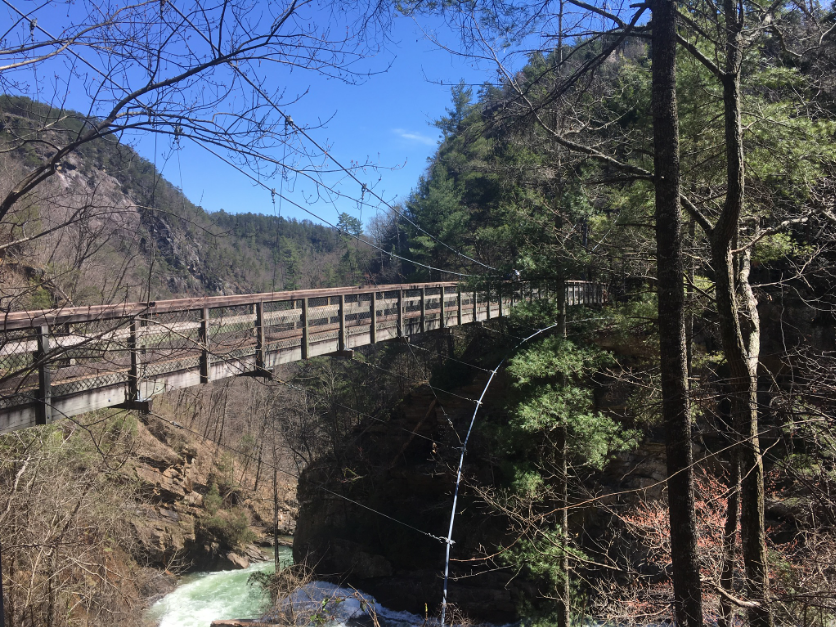 Earlier this spring my wife and I went up to Tallulah Gorge for a hike with my mother-in-law, Melinda’s brother, and his new bride. It was the first really nice day of the year after all of the rain we had received in the first quarter of 2019. It was around 70 degrees, sunny, nice breeze; it was perfect.

About 15 minutes into the hike we came across a suspension bridge. If you’ve been to Tallulah Gorge, you probably know which bridge I’m talking about. It's narrow and pretty high off the water with rocks beneath it. I’m not a big heights guy. I’m on a flight as I’m writing this, and take-off still makes me a little nervous. As I tentatively walked the bridge, my in-laws laughing at me, I was thinking about staying balanced and in the center of that freaking bridge. When I stepped off of it, I started thinking about something else, I thought of my clients’ balance sheets.

“Where in the world is this going?” you might be wondering, understandably. The reason I was thinking of their balance sheets is one of the things keeping me temporarily sane was remembering that the suspension bridge has a specific standard deviation. It's okay that the bridge is moving, it's SUPPOSED to move. Same goes for your retirement or investment accounts.

Before I go into that, let's talk about standard deviation first. Mentally dust off those textbooks from your college or high school statistics classes. Don’t worry I wasn’t paying attention back then either. (Go Wolves!) Standard Deviation to put it in layman’s terms is the measurement of movement. That bridge we walked across or any other bridge for that matter is not meant to remain static. It HAS to be able to move a little and give a little because if it were static, every time it would move, it would break. The same is true in the other end of the spectrum; if it moved TOO MUCH, it would also break. Do you think these engineers from Georgia Tech build bridges and guesstimate the standard deviation or do you think they do some math? They do some math. They might not be great at football right now, but they’re pretty good at math.

Here is how standard deviation works with your investments. Let's look at the Standard & Poors 500 (S&P) for a second; the 500 largest publicly traded companies in the U.S. This is one of the big benchmarks many people are referring to when talking about the ups and downs of “the market.” Depending on your source of data, the historical return of the S&P 500 has been around 10%. That does not mean you got 10% last year; you’ll get the same 10% this year, 10% next year, 10% the year after that, and so on. The returns are not linear. The stock market “goes up, down, sideways and in circles” to quote Matthew McConaughey in his famous role in Wolf of Wall Street.

To receive the 10% historical, annualized returns you had to ride the ride, walk across the bridge with a standard deviation of 18.

Here’s what that means. Take your expected 10% return, add 18 and subtract 18. That’s the first round of standard deviation which occurs for around 65% of all possible outcomes. So, if you’re in the S&P 500, around two-thirds of the time, you can expect to be between positive 28% or down negative 8% in your portfolio. A range of plus 28 and minus 8 does not take the stomach of a billy goat but that’s only the first deviation. So, let's do the math again. The second round of standard deviation.

That’s right. We have to do the third round of standard deviation. Take your +46%, add 18. Take your -26% and subtract 18. That accounts for more than 99% of all possible outcomes. So, to sum it up, if you’re in the S&P 500 like Warren Buffett tells you to be, you have to be comfortable at any given time being in a range of up 64% or down 44%. So, when Jim Kramer was on TV back in ‘08, tears streaming down his face announcing that Capitalism had ended, he was wrong. Yes, brace yourself for this one, someone on television and the internet was wrong. The S&P ended down around -38% for the calendar year 2008. It doesn’t happen very often but every now and then, we fall into that 3rd deviation, good or bad. The PhDs and CFAs in the world of finance knew the machine wasn’t broken, but it's still scary when you fall in that 3rd deviation on the negative side, isn’t it? We fell into only the second deviation during Q4 of 2018, what does that tell you about your tolerance for risk?

Walking across that bridge in the North Georgia Mountains, I knew the math, but I was still scared! That’s where I come into your financial life, to hold your hand across your financial bridge from wealth accumulation to retirement and through wealth distribution, letting you know of the facts and the math while the media tweets away and screams in your face for attention. That’s why it's understandable that even if now you know the financial math, it's completely normal to be scared during the next market dip. How were you feeling during Q4 of 2018? Down? How are you feeling after Q1 of ‘19? Up?! Maybe it’s time for a coach to help with this. DALBAR Inc. a leading financial research institution has shown data that while the market has provided returns in the double digits, the typical investor has only received, 1, 2, 3% in returns because when that bridge starts to move, clients head back to the beginning of the trail, waiting for the bridge to stop shaking, while our clients have walked through it and are taking in the higher views.

When we first meet, so many of you have no clue what kind of standard deviation you’re taking, and many of you don’t understand what kind of returns you’re getting. Many of you are riding a roller coaster you didn’t know you signed up for and you’re not even getting compensated fairly in returns for the ride you’re taking and you’re either trying to do it by yourself, on your own because you majored in finance or accounting at a school where they don’t even teach personal finance. Or maybe you’re working with an advisor who isn’t helping with behavior or consistent savings and staying the course. Either way, maybe it’s time for a change.

For my clients, I’m helping them strive for BALANCE. What if we could have a combination on your balance sheet? What if some of your dollars could have a much lower or even a zero deviation so that we can pursue higher returns and accept an even higher standard deviation with some of our other dollars?

If this article has got you thinking, maybe it’s time to start game planning for your future, maybe it’s time to figure out what kind of risk you’re taking, and does it fit your risk tolerance, or even if you just have a financial question, I’d love to chat and help you.

Send me an email at andrewmatthieson@ashfordadvisors.net or send me a message on LinkedIn and let's discuss working together and how we can take your finances to the next level.